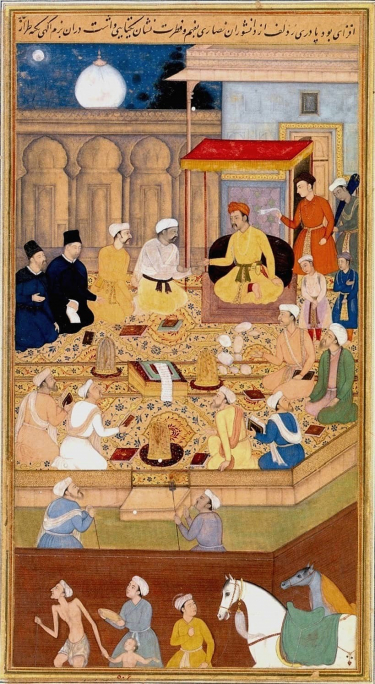 Eminent Ottoman poet of the 18th century, Şeyh Gālib was the quintessential multilingual Ottoman Sufi. He was the head of the Mawlawῑ lodge of Galata in Istanbul and the author of works in both Turkish and Arabic. His magnum opus is an allegorical work of narrative poetry in Turkish, the maṯnavῑ named Ḥüsn ü ʿAşḳ (Beauty and Love). Gālib was deeply influenced by the Indian style in Persian poetry and dedicated long passages in his work to explaining his poetics and criticising his predecessors. In fact, Ḥüsn ü ʿAşḳ can be read as a commentary on language, speech, and literature, in their divine and human aspects. The work narrates the love story of two characters named Ḥüsn and ʿAşḳ. The three layers of the allegory depict the manifestation of the universe, the Sufi’s mystical journey towards God, and the act of writing as expressed by Gālib’s composition of Ḥüsn ü ʿAşḳ. The mystical journey of ʿAşḳ to unite with his beloved Ḥüsn is filled with characters with various conceptual names, the most prominent of whom is ʿAşḳ’s spiritual master Suhan (Word).

This paper aims to interpret Şeyh Gālib’s Ḥüsn ü ʿAşḳ along two major axes: The first is the influence of the thought of Ibn ʿArabῑ and the doctrine of the Oneness of Being. The second is the influence of Jalāl al-Dῑn Rūmῑ, whom Gālib refers to as the Anatolian Prophet. Gālib’s conceptualization of language and literature exemplifies a creative synthesis of these two spheres of  influence. Rūmῑ is identified with Suhan in the text as Gālib’s own spiritual master, while the Maṯnavῑ, the model for Gālib’s artistic creation, is described as the essence of the Qur’an. Suhan is also the barzakh, the limit between the purely physical and purely intelligible realms, between the beloved and the lover. Gālib’s multilingual mystical universe is one where each great piece of literary creation has to define its own theoretical outlook on language and literature. This outlook, which is the key to unlocking the various allegorical layers in the text, demands a dynamic and personal engagement with previous conceptualizations within the multicultural Islamic universe.